The Moguls invaded the territory of India in the 16th century and ruled for almost 300 years. During their journey to India, through present day Pakistan, the Moguls came across the much admired Persian style of cooking, which they adapted and introduced to Pakistan and India.  This has become known as the Muglai Cuisine.
Today I would like to share with you a typical Mughal dish originally prepared by the Master Chef Sajid Hussain Qureshi himself and author of the cook book in English Language "Art of Mughal Cuisine"
ILM-O-IRFAN PUBLISHERS, published by Gullfraz Ahmad, 1rst Edition January 2004 which I am presently using.
The name of the dish is Hussaini Kabab.  We had it for lunch and it was excellent. Due to
health reasons a change was made to the topping sauce. Instead of the milk/butter/cream almond paste mix we prepared a Raïta instead with yogurt, shredded cucumbers and dried mint served with naan bread and a salad.
You will therefore need the following:
Serves 4-6
-  900 gms boneless lean meat, mutton or lamb cut in 1 inch cubes.

For the sake of keeping the recipe as per the author the topping is also included.
For the topping:
-  4 Tbsp. butter.
-  150 ml milk
-  25 gms almonds or cashew nuts ground to a fine paste.
-  100 gms of fresh liquid cream.
Method:
-  Combine all marinade ingredients and mix well. Marinate cut meat cubes in the mixture. Cover and leave for 3-4 hours refrigerated.
-  Thread 4-5 pieces of meat on each skewer and cook on a charcoal fire or under a preheated grill until crisp and brown all over. 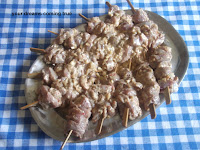 -  Melt butter, add milk, almond paste and cream and cook over a slow fire until mixture thickens.
-  Place cooked kababs in a serving dish and spread the milk sauce over each kabab.
-  Serve hot with parathas or naans.
As mentioned above I did not use the milk sauce for health reasons and replaced it with a Yoghurt / cucumber / mint Raïta as follows:
-  500 gms of  cold yoghurt.
-  2 cold cucumbers shredded.
-  1 Tbsp. dry mint.
Mix all the above and serve with kebab.

As for the naans.... I will tell you my adventure on my next episode!
Bon Appétit, Ya Siko
Stelio
Personal Opinion: The marinade was out of this world. It could be used with chicken and beef.
Lamb