November 04, 2016
I was told by an American friend of mine that Quince, the fruit, grows in various parts of the United States but for some reason people do not use it.


for adults.
Source: USDA Nutrient database
Above, courtesy of Wikipedia, you will find the benefits of quince when consumed raw (very difficult).  It must be cooked!

Since ancient times in Greece,  quince has been used as a dessert, or used to cook it with various proteins such as pork, beef, and chicken.  I remember my father used to make quince marmalade / jam and jelly when I was very young. 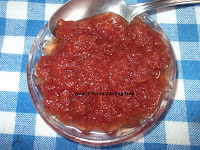 Quince the marmalade:Quince marmalade or jam is delicious with butter on freshly toasted bread in the morning, delicious when eaten alone and really fantastic when served with Greek thick strained yoghurt as a dessert.
To make one kilo of quince marmalade you will need:
-  1 kg of quince fruit, whashed well, peeled, and grated on the thickest part of your table grater with the many holes.
-  2 Tbsp. of lemon juice to prevent the quince from taking a dark color.
-  3 cups water.
-  500 gms caster sugar.
-  1/2 cup corn syrup.
Method:
-  Put all grated quince in a pot with the water and the lemon to prevent quince from becoming black.
-  Boil grated fruit with the water and lemon until the quince is al dente and all the water has been nearly absorbed.
-  Turn off heat, throw in sugar, cover and set aside till next morning.
-  Turn on medium heat again, and boil till the mixture thickens but not too much.
-  Add the corn syrup and two to three leaves of geranium so as to give it beautiful reddish pink color.
-  Immediately turn heat off and transfer pot to cool.When cold, fill your sterilized jars while putting one in the refrigerator to have with breakfast or the thick Greek yoghurt.Enjoy this typical Greek jam.
Good Luck
Stelio
Jams and preserves