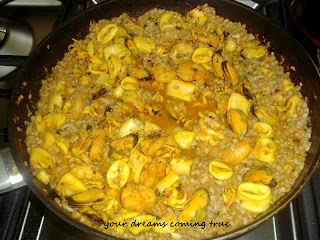 The difference between Bulgur and Cracked wheat is that the latter has not been parboiled.

Bulgur is considered a whole grain by the U.S.D.A. Cracked wheat is found in most supermarkets and has already been used in this blog. Buckwheat on the other hand has not been used. So this is a completely new recipe.

Buckwheat or Φαγόπυρο in Greek is difficult to find in Greece unless searched in Health Food/Organic Food supermarkets. Buckwheat can be found cracked or milled.Wikipedia mentions that buckwheat is not wheat.

For all intensive purposes, cracked buckwheat has been used in this recipe and used instead of rice.

To make seafood with cracked buckwheat and turmeric you will need:
Ingredients:
Serves 4 - 6
-  1 cup cracked buckwheat.
-  2 cups boiling water.
-  400 gm frozen calamari pieces and tentacles thawed.
-  400 gm frozen mussels thawed.
-  400 gm already boiled but frozen baby shrimp thawed.
-  1 Tbsp. extra virgin olive oil.
-  1 onion finely chopped.
-  2 tsp. garlic/ginger paste.
-  1 Tbsp. turmeric powder.
-  As little salt and pepper as possible to make the food palatable.
Method:
-  Add the cracked wheat to the boiling water, wait until the water boils again then reduce heat to minimum.
-  Cook covered for about 18 to 20 minutes max.
-  Heat a dry non stick pan separately; add chopped onion and stir fry till soft.
-  Add strained and dried calamari pieces and stir for half a minute.
-  Add strained and dried mussels and stir for another half a minute.
-  Add the strained and dried already boiled shrimp and stir for half minute.
-  Add the garlic/ginger paste and mix well.
-  Add the turmeric and mix well.
-  Add the salt and pepper.
-  Switch off the heat then add the extra virgin olive oil.
Note: By now the above seafood will have shed their liquids thus producing a delicious yellowish sauce.

Before serving, add and mix the cracked buckwheat to the seafood.

Important Note:  this dish is can be consumed by diabetics because of the buckwheat as opposed to the cracked wheat or rice.