Profiterole....A Very Common Dessert But Not When Everything Is Home Made! 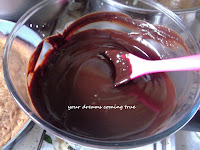 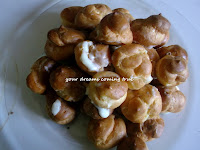 Everybody loves Profiterole.  According to Wikipedia Profiterole is the "cream puff" which has appeared on US restaurant menus since 1851,[9] if not earlier.The record for world's largest cream puff, weighing in at 125.5 pounds, was achieved August 11, 2011 at the Wisconsin State Fair by Dave Schmidt and Team Cream Puff.[10] The Wisconsin State Fair is known for its dairy bakery that has been producing cream puffs during the fair since 1924.  However Profiterole, or the cream puff, or just puff was used in old English and French Cuisine but not as a sweet but as a savory added stuffed in soups..... 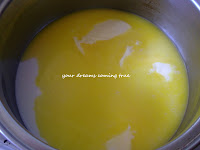 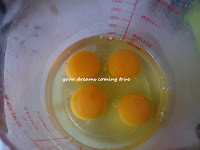 When we talk of Profiterole we mean cream puffs or choux in French the size of a golf ball filled with a pastry cream, whipped cream, or ice cream arranged pyramid like in a beautiful deep plate topped with warm chocolate sauce or ganache. 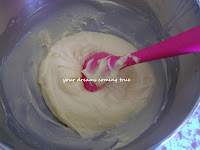 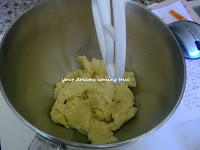 In Egypt my family used to make this dessert by buying the small puffs ready filled then immersing them in a big bowl of home made chocolate mousse. The result was soggy puffs by the time they hit the plate.

Living in Milan, where some say Profiterole originated in the North East, I came to learn that the puffs were filled at the last minute and topped with a warm chocolate sauce. This idea was much better because the puffs were fresher and the sauce was warm. I prefer this method to the presentation in Greece as shown in the picture. 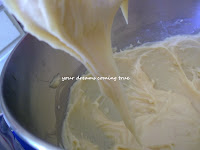 If cooking and baking is your cup of tea, and if you have the patience, the recipe for this dessert is as follows: 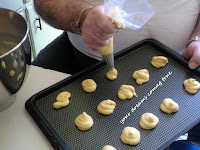 Method:
-  Mix milk, water, and butter in a saucepan.
-  Mix flour, salt and sugar in a bowl.
-  Bring milk mixture to a boil.
-  Immediately throw in flour mixture.
-  Stir till flour mixture absorbs all the milk mixture to form a dough.
-  Cook a little (½ minute) turn off heat.
-  Flatten dough on a big plate and cover with cling film and let cool. 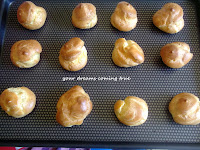 Note: the cling film is put to prevent the formation of a dry crust on the dough while cooling.
-  When cooled put dough in your mixer and start mixing to render it creamy.
-  Introduce a portion into your pastry bag and start making small olive like spots on a baking sheet.
-  Bake for 15 to 20 minutes at 200 degrees C till golden.
-  They should nearly double in size and be hollow.
-  Set aside.
For the Pastry Cream:
You will need:
-  1 liter milk.
-  250 gr sugar.
-  100 gr corn flour (corn starch).
-  2 whole eggs.
-  2 yolks.
-  60 gr good fresh butter.
-  1 vanilla bean (pod).
Method:
-  Mix milk, part of the sugar the vanilla and bring to a boil in a saucepan, then reduce heat to minimum.
-   In a bowl, mix corn flour (corn starch), eggs very quickly otherwise the cornstarch will solidify, and the rest of the sugar.
-  When the egg / corn starch mixture is well blended together without any lumps, this is where you have to be very careful: take a ladle of the hot milk and pour slowly into the colder egg mixture while mixing quickly to increase its temperature. Take another ladle of hot milk and again pour slowly into the egg mixture while stirring quickly. Take a third and a fourth till you see that both fluids are nearly equal in temperature.
-  At this point you can pour all the egg mixture into the milk, increase the heat, and continue stirring with the whip till your total mixture temperature is not more than 83 to 85 degrees C. If you do not have a thermometer, then stir the cream till it is thick enough to form a layer on the back of a spoon and leaves a clean groove when you run your finger through it.
-  At this point you should add the butter and stir till it melts and blends in.
-  The cream is now ready and you must turn off the heat, and immediately transfer it onto a bowl, and put cling film on the surface to prevent the formation of that crust till it cools down. The cling film should completely touch the cream surface with no air pockets.
-  When cold,  mix well to turn it into a smooth cream again and set aside.
For the chocolate ganache:
-  Melt 400 gr of 70% content in cocoa good quality chocolate (Valrona) in a bain marie.
-  Add 400 gr of full 35% cream.
-  Add 2 Tbsp. good quality fresh butter cool slightly.
-  Add 1 Tbsp. of Grand Marnier orange liqueur or French Cognac stirred into the ganache.
-  Mix everything together to make a shiny, smooth, exciting chocolate sauce. Set aside and keep warm.

When the time comes to serve, make a cut in the choux cream puffs, and fill with pastry cream, ice cream, or whipped cream as you wish. This recipe is for cream pastry filling.

If you would like to prepare individual plates for a seated dinner, then put as many filled choux cream puffs on a plate as needed and ladle chocolate ganache over the top. Do not drown the choux in the chocolate.

If you want to present one big plate of Profiterole for a buffet dinner,  then arrange the choux in a pyramid manner and ladle chocolate ganache over the top. Again here do not drown with chocolate. Bring the bowl with the chocolate sauce on the side if someone would like more chocolate.

The important thing here is the choux cream puffs must not go completely soggy.
Enjoy this wonderful dessert only if you are a guest. If you are the host, keep it for the next day to give you time to rest.
Stelio