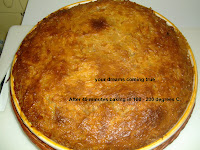 that the father and mother of the eldest son of a family is called Abu Ali (father of...) and the mother is called (Om Ali...Mother of Ali). This applied only to boys, girls were not important then. Legend has it that back in the days of the Ayyubid dynasty (Arabic: الأيوبيون‎) which was of Kurdish origin,[1][2][3] founded by Saladin and centered in Egypt, that Om Ali married to one of the rulers was "gotten rid of" by that ruler's second wife by the name of Shagaret El Dorr (Tree of Pearls) so as to be the number one wife. To celebrate the event, she distributed to the people bread with milk and honey .  When the ruler passed away, Shagaret El Dorr ruled in his place for a number of years until she too succumbed to the same fate as that of Om Ali...
In order to make this dessert you will need:
Note:
-  300 gr very thin filo pastry sheets same as the ones used for the pistachio baklava.
-  250 gr castor sugar.
-  1½ liters of milk boiled with pieces of orange rind and 1/3 pod vanilla and left to infuse.
-  1½ cups of good quality fresh butter at room temperature. 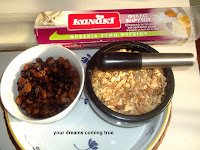 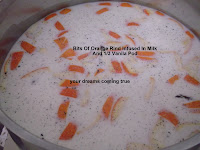 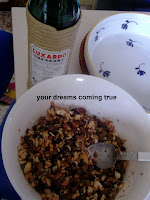 -  2-3 Tbsp. Maraschino Luxardo according to taste.
* Unroasted almonds are put on a cookie sheet in a preheated oven to 160 degrees C for 15 minutes.
Preparing the filling:
-  Mix all nuts together and break them using a mortar and pestle. They must not be pulverized.
-  By now the raisins and black currants should be well swollen; strain but do not throw away the juice which is deliciously sweet and may be used for something else some other day.
-  Mix broken nuts, raisins, black currants and nuts together well..
-  Add 2-3 Tbsp. Maraschino Luxardo and mix well. Let stand till needed.
Method:
-  Using the base of the round oven proof dish (in this case 28 cm)  cut the filo same size with a very sharp knife or a razor blade. Keep any pieces of filo pastry which can be used as well. They do not need to be round.
-  Melt butter in 30 cm stick free pan and heat.  Add some olive oil to prevent butter from burning.
-  Start frying each 28 cm sheet of filo pastry in the 30 cm pan. In and Out, quickly do not burn. 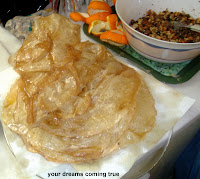 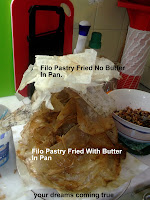 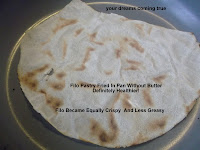 -  Lay the other half of the filo pastry sheets on top of the filling.
-  Strain out the orange rind pieces and the vanilla pod.
-  Pour the boiling milk over the whole.

-  Let stand ½ hour or till you see that the filo pastry has absorbed all milk. 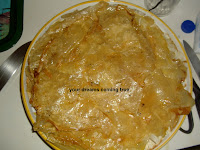 Best of luck and,
Bon Appétit,